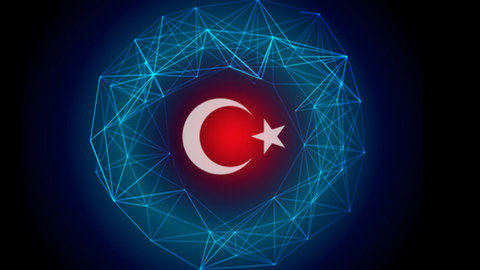 “Disruptive.” “Transformational.” “Revolutionary.” These are some of the terms often used to describe blockchain and distributed ledger technology (DLT) in recent years.

Since its conceptualisation in 2008, blockchain first gained widespread recognition as the infrastructural backbone underlying cryptocurrencies like Bitcoin.

But the use-case for blockchain is now being implemented in various industries, from education and finance to digital governance and agriculture.

“Blockchain technology has the power to make radical changes to public and individual life, and above all, the business world,” Ahmet Usta, chief editor of the Blockchain Turkey Platform and author of Blockchain 101, told TRT World.

“Harnessing this power involves much more than using this innovative technology as a tool, it requires a fundamental change in the way we think about and define work processes.”

Still in its early stages, Turkey’s burgeoning blockchain ecosystem is at the forefront of educating and promoting the technology’s revolutionary potential to the public and private sectors, in preparation for what is being called “Web 3.0”.

The future is blockchain

Fundamentally, blockchain is a digital record of transactions backed by cryptography. Each “block” of information is added to the “chain” (a public ledger) and validated through a decentralised, peer-to-peer network. The chain falls in a specific sequence, with each block carrying a unique fingerprint (or hash), making the database tamper-resistant and immutable.

The technology is essentially a global consensus system – it allows people to coordinate and cooperate around a neutral source of information without trusting each other or a central administrator. Being decentralised means that all data exists on the network instead of one place, which is how the internet operates today.

With data siloed in costly private servers, the challenges of our centralised online infrastructure – security, privacy, transparency – are what blockchain solutions propose to solve. It doesn’t require a third party to conduct exchanges (leading to lower costs and speedier transactions), it's transparent (anyone can track the flow of goods or services), and prevents one person or group from being in control of the system.

While cryptocurrencies were the first platform developed using blockchain, there is no limit to the technology’s application.

Crypto projects like Ethereum and Ripple have taken its principles in new directions, while organisations across the spectrum like Unilever and Maersk to HSBC and the UAE government are in the early adoption phase.

Work by a growing number of entrepreneurs and developers aside, financial institutions were the first to dip their feet in. Now academia, public institutions and consulting firms have begun dedicating resources to researching blockchain’s various use-cases.

In the wake of the Covid-19 crisis, the case for blockchain implementation has grown even stronger, as reflected in the World Economic Forum’s publication of a deployment toolkit designed to assist governments, enterprises and organisations to develop more resilient value chains.

In Turkey, like elsewhere, blockchain is primarily linked with cryptocurrencies, and it has been among the leading countries in crypto adoption for years.

Speaking with TRT World, Ebru Güven says the majority involved in the space are more interested in cryptocurrency trading than exploring the technology behind it.

“Having said that, there is a significant growth in the attention towards understanding the basics of the technology and trying to discover the ways to implement it in business models,” she says.

Founder and director of the BlockchainIST (Blockchain Istanbul) Center, Dr Bora Erdamar told TRT World that educating people on the potential of the technology beyond the realm of cryptocurrencies is essential for the space to evolve.

“Popular conception of this technology is still through people who are using it to get rich as soon as possible,” he says, which tends to elicit suspicion from capital investors and regulators.

Established in 2018 as Turkey’s first ever university-level blockchain research unit at Bahcesehir University, BlockchainIST aims to close the blockchain expertise gap and encourage deployment of the technology across the public and private sector.

Operating as part-incubation-part-consultancy, the research centre offers education and training services including an innovative Master of Science program in Financial Technology (FinTech), which Erdamar leads.

He believes that Turkey’s young and tech-savvy population can provide the country with a competitive edge in the global blockchain race.

But while many young Turks are enthusiastic about starting businesses in the space, they require mentorship and a solid grounding in the technology's fundamentals. At the moment, BlockchainIST is among the only certified options that can offer them that.

“Our main goal is to use the potential of this technology, starting with the financial sector, but also those like health and logistics to help Turkey’s start-up system to flourish,” says Erdamar.

Many who graduate from the centre bring their expertise to banks or start their own tech companies, forming their own blockchain study groups in corresponding institutes and firms.

One of its collaborations is with DenizBank. Last July, it established a ‘Blockchain Lab’ with the Deniz Aquarium Innovation Center, aimed at increasing the number of blockchain experts and FinTech projects in the Turkish market.

Also last year, BlockchainIST partnered with Cornell University’s Ava Labs to develop various blockchain projects. One of them, CertifyIST, is an open-source infrastructure for issuing, verifying, and sharing educational documents like degrees and certificates.

The centre also broadcasts content online, with open lecture series on Crypto Economics and ‘Fintech for Everyone’ on its YouTube channel, and interactive sessions on Clubhouse discussing topics like Bitcoin and Decentralized Finance (De-Fi).

Established as an initiative of the Turkish Informatics Foundation, Usta says BCTR’s vision is to “secure Turkey’s regional leadership in a decentralised system” and to build “a sustainable blockchain ecosystem aimed at removing all obstacles to new modes of business that this technology will give rise to in the period ahead.”

Through a combination of workshops, seminars, publications and consortiums, the platform endeavours to increase awareness around blockchain and bring together relevant public and private stakeholders to determine its strategic priorities for the future.

“We see tremendous potential,” Usta declares. “Business models will need to be rethought and redesigned in many areas, especially in finance and international trade.”

“However, we expect it to be a transformational process, not a destructive revolution.”

Encouraging women from C-and-mid-level executives to academics and lawyers, as well as developers on active blockchain projects, Guven and her co-founder Basak Burcu Yigit recognised women’s participation and presence in the ecosystem should not be ignored.